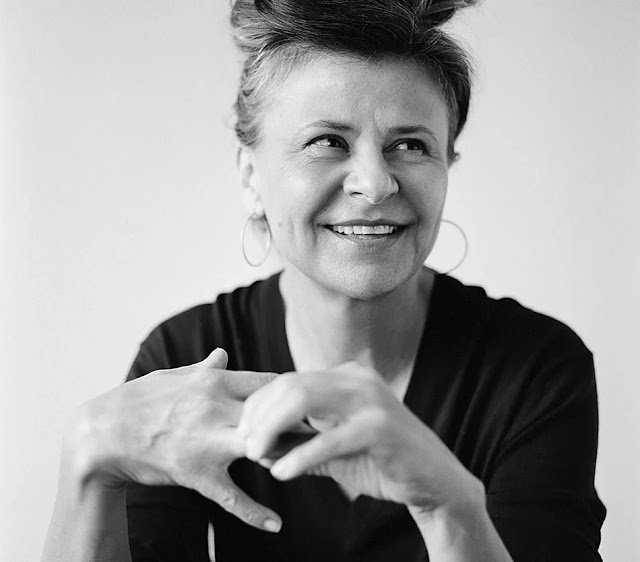 I try to do everything ... There's nothing I won't attempt.
– Tracey Ullman
Tracey Ullman was born in Slough, England to a Polish emigre father and British mother.  When Tracey was six her father died. In an effort to cheer her mother up, Tracey and her sister Patti would put on shows on their mother's windowsill in her bedroom.  Tracey would mimic everyone: family, friends, neighbors, even celebrities.  When she was twelve, a headmaster recommended that she attend a performing arts school. She auditioned and won a full scholarship to the prestigious Italia Conti Academy.
At sixteen, Tracey made her first professional appearance dancing in Gigi in Berlin. Upon returning to England, she joined the popular "Second Generation" dance troupe.  She would go on to appear in numerous West End musicals such as Elvis, Grease and The Rocky Horror Picture Show.
She received the attention of the BBC after her breakout award-winning performance in Four in a Million at the Royal Court Theater.  They would offer her own show - a first for any female performer.  Three of a Kind, with comedians Lenny Henry and David Copperfield, premiered in 1981.  This BAFTA award-winning series made Tracey a household name.  She would go on to appear in A Kick Up the Eighties with Rik Mayall, Miriam Margolyes and Robbie Coltrane, and Girls on Top with Dawn French and Jennifer Saunders.
In 1983 she would try her hand at a music career. Her album You Broke My Heart in Seventeen Places reached #14 on the British charts and was certified Gold. Her song "They Don't Know" reached #2 in the UK and #8 in the United States.  In 1984, she released her second album You Caught Me Out.
Tracey continued to concentrate on her comedy and film career.  In 1984, she appeared in Paul McCartney's Give My Regards to Broad Street.  Her performance in 1985's Plenty opposite actress Meryl Streep garnered her a BAFTA Award nomination for Best Actress in a Supporting Role. ​
In 1986, Tracey set her sights on a television career in the United States.  In 1987, she teamed with famed television and film producer, James L. Brooks. The pair created the sketch comedy series The Tracey Ullman Show for the fledgling Fox network.  The series would give birth to the longest-running American scripted primetime television series in history, The Simpsons. The Tracey Ullman Show would run for four seasons, ending its run in 1990. The show won a total of 11 Primetime Emmy Awards.  Tracey, herself, would be awarded 3, along with a Golden Globe and 5 American Comedy Awards. ​
After The Tracey Ullman Show, Tracey would go on to star in such films as 1990's I Love You Death,  Mel Brooks' Robin Hood: Men in Tights in 1993, and Woody Allen's Bullets over Broadway in 1994.  She also made a return to the stage with The Taming of the Shrew in 1990, starring opposite actor Morgan Freeman, and the one-woman Broadway show, The Big Love. ​
Tracey made her return to British screens in 1993 with Tracey Ullman: A Class Act.  She was joined by Monty Python's Michael Palin. The special poked fun at the British class system.  HBO became interested at this point and commissioned a special for American audiences with the caveat that she take on a more American subject.  She chose New York. Tracey Ullman Takes on New York premiered in October 1993 and was a smashing success. It received 7 Primetime Emmy nominations, winning 2, an American Comedy Award, and a CableAce Award.  It was at this point that HBO proposed a "Takes on" television series.  Tracey and her husband, independent British television producer, Allan McKeown, set up production on Tracey Takes on.. in Los Angels in 1995. ​
Tracey Takes on... would prove to be just as successful, running four seasons and winning 6 Primetime Emmy Awards, 3 American Comedy Awards, a Screen Actors Guild and Satellite Award, and 2 GLAAD Media Awards.
In 2000, Tracey starred in Woody Allen's Small Time Crooks.  Taking a break from her character comedy-based work, in 2001 Tracey created the fashion-based chat show Tracey Ullman's Visible Panty Lines for the Oxygen network, spun-off from her e-commerce clothing site, Purple Skirt, launched in 1999.  The show ran for two seasons.  In 2003, Tracey returned to HBO with the 2003 comedy special Tracey Ullman in the Trailer Tales.  The special, spun-off from Tracey Takes on..., focused on one Tracey's most popular characters, septuagenarian, Ruby Romaine. ​
In 2004, Tracey starred in John Waters' A Dirty Shame. In 2005, she starred with one of her comedy idols, Carol Burnett in ABC's television adaption of Once Upon a Mattress, playing Princess Winnifred.  That same year, she returned to HBO with her autobiographical stage show, Tracey Ullman: Live & Exposed.
An inveterate knitter, Tracey published a book on the subject, Knit 2 Together: Patterns and Stories for Serious Knitting Fun with fellow knitter and friend Mel Clark in 2006.  In 2007, Tracey started work on a new sketch comedy series Tracey Ullman's State of the Union for Showtime.  The show premiered in 2008 and ran for three seasons. The show garnered 6 Primetime Emmy nominations, winning 1 in the category of Outstanding Makeup For A Single-camera Series, as well as two Satellite Awards (Best Comedy Series and Best Performance in a Comedy Series) and a Screen Actor's Guild (SAG) nomination. ​
In 2011, Tracey returned to the British stage in Stephen Poliakoff's My City, for which she received a Best Actress Evening Standard Theatre Award nomination.  In 2014, she joined the stage production of The Band Wagon directed by Kathleen Marshall.  That same year she appeared in Disney's Into the Woods playing Jack's Mother.
After thirty years, Tracey returned to the BBC with the sketch comedy series Tracey Ullman's Show in 2016; it would later spin-off into the topical sketch comedy series Tracey Breaks the News.  The former garnered 3 Prime Emmy Award nominations.  In 2017, Tracey appeared in the BBC-Starz adaptation of Howards End playing Aunt Julie. ​
Tracey can currently be seen portraying feminist author and activist Betty Friedan in the FX limited series Mrs. America.  Her performance garnered her yet another Emmy nomination for Outstanding Supporting Actress in a Limited Series or Movie.
AWARDS