Character Tracey Did, Got Pinned On School Teacher

YEARS ago, there was a comedy series called Three of a Kind starring newcomers Lenny Henry, David Copperfield (whatever happened to him?) and Tracy Ullman.

The talented Ms Ullman played the then newly-minted stereotype of a long blonde-haired, head-tossing Sloane Ranger, whose catchphrase was: "OK, yah."

To my utter astonishment, the pupils at the Tyneside school where I taught thought I was a dead-ringer for this character. In particular, my voice caused great hilarity: "Because you talk dead posh, like, Miss." 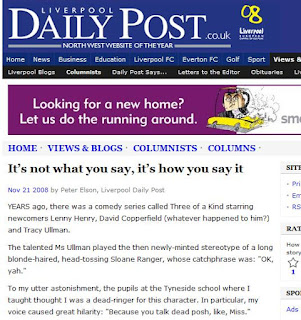