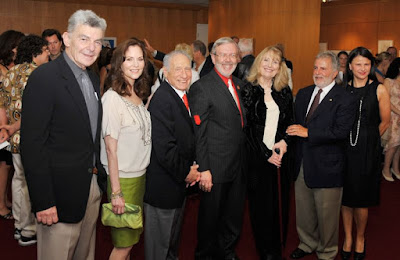 Friday night's tribute to Mel Brooks at the Academy of Motion Picture Arts & Sciences was as heartfelt as it was hilarious.

Leonard Maltin was, as ever, a fantastic host. The tributers were extremely qualified to talk about Mel and his impact on the biz, his unique genius and the crazy-funny stuff like how Brooks squeezed an extra $300,000 out of MGM/UA's David Begelman (tip: always hit up a studio chief up after lunch, not before) so that Richard Benjamin and Brooks' Brooksfilms banner could do right by "My Favorite Year" (thank goodness they did).

Carl Reiner revealed that it was Burns and Allen -- George Burns and Steve Allen -- who ensured that "The 2000-Year-Old Man" routine -- something Reiner and Brooks had done for fun at parties for years (as Reiner put it, "for Jews and for non-antisemitic gentiles") -- was put down on wax and mass marketed as a comedy album(s). Burns told them after one party perf that if they didn't record it "he would steal it," Reiner recalled. And then Allen went a step further and booked studio time for them to record a few routines.

Everyone on the stage made a concerted effort to convey love and admiration for Brooks, as an auteur and as a human being. But I submit that nobody made quite as much of an effort as Teri Garr. She demonstrated incredible grace and resilience in walking on stage to join Lesley Ann Warren and Tracey Ullman in a discussion of performing opposite Mel.

Multiple sclerosis has taken a physical toll on Garr, but the neurological disorder has not claimed the exuberant spirit that caught Brooks' eye way back when. After a clip of "Young Frankenstein" was shown, Garr deadpanned, "I haven't changed a bit."

Another emotional moment in a night of big, big, can't-catch-my-breath laughs came when Brooks himself noted during the Q&A with Maltin how deeply he was moved by the clips of his late wife, Anne Bancroft, from "Silent Movie" and "To Be or Not To Be." They were married for 40 years and had a son, Max, who sat next to his father during Friday night's fete. As my husband observed, Bancroft was immensely talented, and she was a babe.