The Wait Is Almost Over!

We now have official confirmation that Season 3 of "Tracey Ullman's State of the Union" is now in editing, and will air on Showtime earlier than the previous two seasons. The official launch date is January 25, 2010! As previously reported, the new season has been directed by Tracey herself! Season 3 consists of another 7 brand new episodes. For those non-Americans out there, "State of the Union" may also be showing up on your screens as well! The show has been sold around the world. If we can get air dates for the other territories, we'll add it to the blog!

Also coming is the Season 2 DVD set for "State of the Union" released by Eagle Rock Entertainment. The second season will also be made available through iTunes. Any additional info we can get, we'll be sure to post it!

Here is a behind-the-scenes pic from the set of "State of the Union". You can see the pharmacist character, Padma Perkesh's Bollywood pharmacy set. 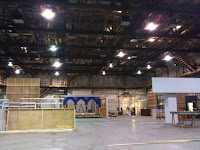 formerly proud said…
I have never touched a fan club or any such thing, but I am now watching "State of the Union" and Tracy nailed this country perfectly. I can barely believe it is her in each scene her impersonations and accents are so remarkable, even though I have watched her show in the past and seen her in other films.
This movie 'documentary' is so revealing and done with the cynical wit she is famous for, that I paused the film, because I had to send her congratulations.
February 3, 2010 at 10:52 AM