Tracey Ullman: “The Queen Of Characterization.” State of The Union DVD

STATE OF THE UNION

“The Queen Of Characterization.”
New York, NY(Hollywood Today)7/13/11/— The complete third and final season of Tracey Ullman’s State of The Union on two discs July 19. The hit half-hour comedy sketch series—executive produced by Emmy-Award winning Allan McKeown Presents—stars the British comedienne in a variety of guises as she pokes fun at American people in an irreverent and truly original way. Her mimicry and flair for impersonation makes Season #3 the most ambitious season of the series so far as Ullman inhabits 60 different characters—original creations as well as Arianna Huffington, Barney Frank, Rachel Maddow, Matthew McConaughey, Susan Boyle and many others—in her hilarious tour across the U.S.A. [MSRP $14.97] 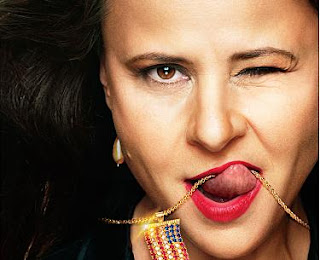 Viewers will thrill to a Michael Jackson-styled dance routine in Chicago by O’Hare Airport’s favorite agent Chanel Monticello and yet another exhibition of the fine art of dance (and song) in the great state of Tennessee by Padma Perkesh from behind her pharmacy counter.
Disc #1 clocks in at 117 minutes, disc #2 at 84 minutes. This includes 40 minutes of bonus materials: “The Making Of Tracey Ullman’s State Of The Union Season #3,” a behind-the-scenes feature with commentary from Tracey, outtakes, and “A Twist On Outsourced Call Centers.”
Tracey Ullman is an award-winning actress, singer, comedienne, dancer, screenwriter and author. Her previous show, The Tracey Ullman Show, ran from 1987 to 1990 and spawned the hugely successful spin-off cartoon, The Simpsons. She has produced numerous HBO specials and appeared in major motion pictures. As a recording artist, she was signed to England’s Stiff Records where she scored six British hit singles in 1983 and 1984. Her blatant disregard for societal norms and her anything-goes mentality have made her “The Queen Of Characterization.” Warning: this third season is highly addictive.