I really enjoy them referring to Tracey as "singer Tracey Ullman"! 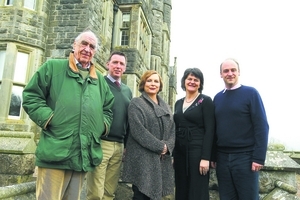 
The Absolutely Fabulous star has been busy shooting the show in Fermanagh with a whole host of stars including Britain's Got Talent judge David Walliams and Ally McBeal star Calista Flockhart. And this week the celebs continued to arrive in the county, with Wild at Heart's Robert Bathurst and singer Tracey Ullman both spotted in Newtownbutler. The location at Crom has been dubbed "Crom-ton" after television's Downton.

Mrs. Foster said: "The fact that Crom Castle was selected as the venue to film the PG Wodehouse 'Blandings' stories is a real coup for Fermanagh.

"I was very encouraged, but not surprised, to hear from the production team how impressed they are with Crom Castle as a location. It really is a spectacular setting and it will look amazing on the television screen," she said.