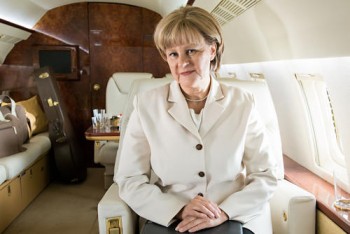 Tracey, along with producer Caroline Norris and writers Kevin Cecil and Andy Riley will take part in a special two episode screening of "Tracey Ullman's Show" with a Q&A session to follow on January 5, 2016. Tickets will become available starting tomorrow, December 2, 2015.

Join us for an exclusive screening of the new series starring the EMMY, Golden Globe and BAFTA award winner Tracey Ullman as she returns to BBC One.

This screening will be followed by a Q&A with Tracey Ullman, producer Caroline Norris and writers Kevin Cecil and Andy Riley

"Tracey Ullman’s Show” showcases Tracey’s extraordinary ability to mimic just about anyone. The six part series features everyday characters and famous faces as Tracey turns her hugely successful comedy eye on the people who live in, and visit, the global hub that is the UK. In the mix, there's a delinquent Dame Judi Dench, Dominic the incompetent app developer, Karen the former drugs mule returning after 28 years in Thai jail, and a surprising take on Angela Merkel.

We shall be screening two 30 minute episodes.

With thanks to BBC One Booking opens Wednesday 2 December, 9:30am