From The Sunday Times: 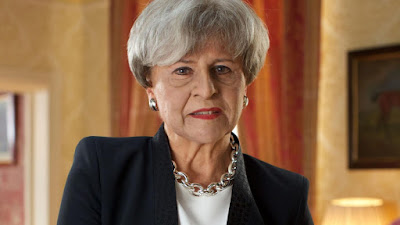 Tracey Ullman as Theresa May
Pete Dadds
by Dalya Alberge

Brexit: The Movie could be coming soon to a screen near you — after producers, paymasters and stars agreed a deal. Film makers think they can put the fun back into politics with a feature-length comedy. Shooting is about to begin for a “withering satire” written by Peter Richardson, founder of the Comic Strip group that included Jennifer Saunders and Alexei Sayle.

The French Job is billed as “a European heist film” that parodies classics such as The Italian Job, the comedy starring Michael Caine.

Richardson said: “We’re taking the piss out of the whole thing.” The mockery will be directed at all sides.

The script features Theresa May, Boris Johnson, the former Brexit secretary David Davis and Jean-Claude Juncker, president of the European Commission. An unknown may be chosen to play Johnson but he is also welcome to audition himself.

Actresses tipped for a role include Tracey Ullman, whose impersonations have included a sexy singing Angela Merkel, the German chancellor.

Trevor Beattie, the film’s producer, said: “This is not the story of Brexit. It’s about a heist, but it couldn’t happen without Brexit.” It is not known who will play Juncker.