What About Dick... And Tracey?

Attendee, Suzi, shared her experience and opinion of the Eric Idle's new stage show, "What About Dick?" The cast included, Eddie Izzard, Billy Connolly, Jane Leaves, and Tim Curry, among a line of others. The actors performed a "read through" of the Idle play, live on stage, which included Tracey. Suzi was also nice enough to share her photos with us...

The play was a "movie for radio" (Eric Idle's words). It was a read
through as if they were recording for radio. It was a 'low-brow comedy about high-brow society', it was a hilarious romp through the early 1900s with laughter, music, a little murder, and a talking piano.

I loved the show, it was hilarious and obvious that the cast was
enjoying it as much as the audience was.

Tracey played multiple roles (as did most of the cast) from a
lower-class woman who "provides therapy for men" to an upper class Aunt who is seeing a therapist who uses vibrating "implements" to cure uptight women. 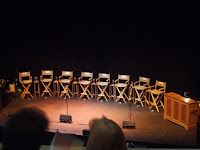 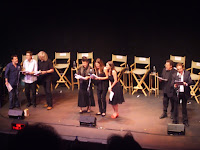 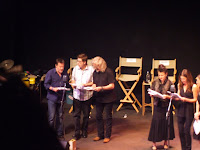 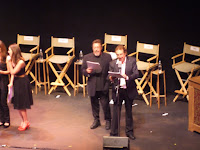 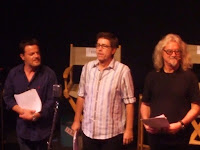 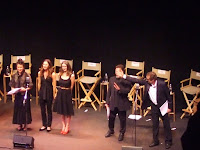